The EPIC-Norfolk team have given many talks to the local community. These talks have detailed how the EPIC-Norfolk study has evolved, as well as sharing some of the findings that have been generated from the study .

Audiences from these talks have been made up of local people, some of whom are study participants, some who may have links with the study via the medical profession, such as GPs and practice managers, and others who may not have heard of EPIC-Norfolk beforehand and who leave with a wider understanding of the research being carried out.

The table below shows most recent EPIC-Norfolk talks and locations:

Members of the EPIC-Norfolk research team have taken part in a wide range of public events. These events are an opportunity for researchers to showcase and discuss their work with different audiences. Public engagement activities continue under the management of the MRC Epidemiology Unit.

For more information about public engagement activities at the MRC Epidemiology unit. 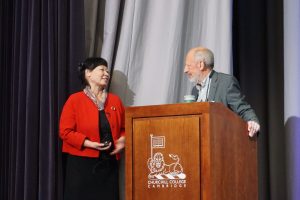 The aim of this symposium was to celebrate the 25th anniversary of the EPIC-Norfolk population study, and to acknowledge the essential contributions from the many partners without whom EPIC-Norfolk would not have been possible.

These include the research staff who have so carefully and conscientiously collected and curated data from participants, the many scientific collaborators who have contributed their specialist and general expertise and resources, the funding agencies who have provided the support for the research, the general practices and health agencies in Norfolk who provided the infrastructure for recruitment and follow up of the participants, the EPIC Participants Advisory Panel (EPAP) who have been an invaluable source of new ideas, constructive criticism and wise advice, and most of all, the participants in EPIC-Norfolk who have so generously given of their time and effort completing numerous questionnaires, providing biological samples, attending new examinations having ever more assessments of their cardiovascular system, eyes, bones, cognition and muscle function over the past twenty five years.

Come and meet our researchers

Participants have provided the EPIC-Norfolk Study with a wealth of data regarding diet and lifestyle over the last 20+ years. How then to choose what to study and focus on? Members of the general public joined the EPIC-Norfolk researchers for a chat about their research over a cup of tea, discovering  what interests them and what they have found out.

Vitamin D and light: a close relationship with a lot of controversy. Diet is insufficient in providing vitamin D; however, to make Vitamin D ourselves, we need sunlight, which tends to be in short supply in the UK. The EPIC-Norfolk study observed that participants who had a higher blood vitamin D concentration had a lower risk of developing lung disease, heart disease and fractures. Prof. Kay-Tee Khaw gave a talk on these findings and shed some light on the question: To D or not to D?

From EPIC Patterns to better health

Looking at patterns in the population allows us to understand the links between diet, lifestyle and health. Members of the general public were invited to help researchers build block graphs of grip-strength to see patterns in the Science Festival 2014 population! Visitors could explore balanced diets on a giant EPIC plate and experience the eye conditions that researchers have been investigating in the EPIC-Norfolk project in the Department of Public Health and Primary Care.

The EPIC-Norfolk team held a public meeting to celebrate 20 years of EPIC-Norfolk research. The meeting consisted of a brief presentation (lasting about 40 minutes) with members of the research team reporting on the progress of the study, some of our main results and our plans for the future. The presentations concluded with a question and answer session and following this there was a chance to meet members of the research team and visit our research information stands in the adjacent Blackfriars Hall.

The EPIC generation game: become part of the bigger picture

At this years Cambridge Science Festival visitors could compete in a battle of the ages. Children pitted against the grown ups in the EPIC generation game. Challenges included fruit attack, play the pairs game, do the dish dash and to become part of the giant population picture.

The EPIC bone of contention: how to grow up healthily

Visitors were invited to take part in activities such as play your cards right, balance the leaning tower of health, and a ‘trolley dash’ through the EPIC-Norfolk supermarket. As well as tackle the frenetic fluency game. Children and adults all  could learn about the vital role that specific vitamins and minerals play in healthy development.

A study looking at the links between diet, lifestyle and health ‐ the nutrition games. Member of the general public were invited to join the EPIC-Norfolk study team to play nutritional cards right; balance the leaning tower of pizza; and enjoy a ‘trolley dash‘ through the EPIC supermarket, all whilst learning about the vital role that specific vitamins and minerals play in our daily lives.

EPIC- Norfolk team held a stall at the Cambridge Science festival where visitor were invited to play your nutritional cards right; balance the leaning tower of pizza; and enjoy a ‘trolley dash’ through the EPIC supermarket. THe aim of the event was to show the vital role that specific vitamins and minerals play in our daily life.

EPIC repeated the stall used at the Cambridge Science Festival in March 2010 to bring our research to a Norwich audience. Visitors were encouraged to compete in ‘The great gut race’. Visitors could also test their food knowledge, strength and see how quickly they could squeeze a fruit through the life-size model of a human gut in the EPIC/CNC Challenge 2010!

EPIC had a stall at the Cambridge Science Festival in the Biology Zone (New Museums Site, Arts School, Large Exam Hall) on 13th March 2010. Visitors were encouraged to compete in ‘The great gut race’. Visitors could also test their food knowledge, strength and see how quickly they could squeeze a fruit through the life-size model of a human gut in the EPIC/CNC Challenge 2010!

PPIRes is a volunteer panel of lay members from a wide range of backgrounds who are trained in the basics of research and are willing to give their time to assist researchers in gaining a users perspective on their work. The panel is hosted by Norfolk Primary Care Trust on behalf of the East Norfolk & Waveney Research Consortium.

Panel members could be involved in reading and amending materials intended for the public such as information sheets and consent forms, advising on study design and questionnaires, debating ethical and governance issues, promoting lay interpretation and dissemination of information.

Shabina Hayat, Nichola Dalzell and Mark Francis (EPIC Research Nurse) were in attendance at this event. A talk was given covering the EPIC activities to date and some of the results to come out of the study so far. There was also the opportunity for panel members to ask questions surrounding our activities. We were also able to gain some feedback from panel members regarding our future public involvement plans.

A short video of the 3rd Health Check appointment was compiled for this and projected in order to show people a little of what is involved.

EPIC held a ‘strongman’ style grip strength activity, highlighting the importance of physical function and maintaining it in later life. Well-known ‘strong’ characters King-Kong, Princes Leia and Superwoman helped people to take part. The aim was to show people that science can be fun and that physical activity is important.

EPIC held a stall in the Biology Zone encouraging children and young people to take part in activities relating to the current health check. These focused on cognition and physical performance and healthy ageing.

Stickers and pencils were given out with the EPIC website as well as leaflets with key findings and general information about the study.